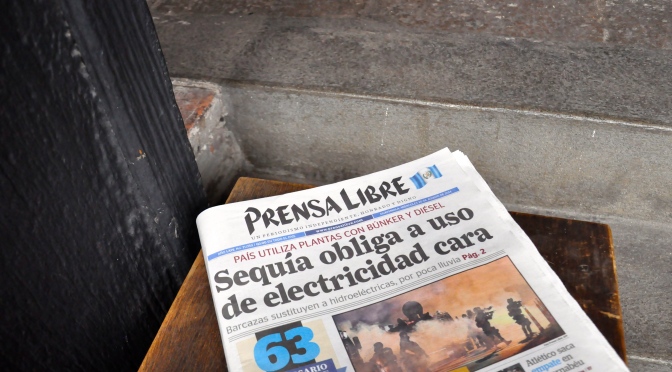 Ah Antigua – you sure know how to churn an old, crumbling city into a delicious buttercream cake. Yes, the city is crowded with tourists and travellers, but this old town is in fact big enough to host a backpacker convention, but also small enough to discover in three days. Or four days…time has this sneaky habit of confusing me.

On how we got to Antigua
It felt like forever. I know that ‘it felt like forever’ is the most used sentence in this blog, but I really consider it important for my readers (i.e. family, friends and the one person from Russia who follows our antics) to grasp the enormity of how long it takes to get anywhere by bus. It takes forever. The border crossing was really non-eventful (just the way I like it), but when we got to Guatemala’s side it was scorching. I can say without a doubt that the sun is indeed a big ball of fire that is much closer to the El Salvador-Guatemala border than anywhere in the world. Expecting to jump on a bus (that’s usually just about to go), we where unfortunately the first passengers to arrive. So we had to wait for an hour. When the bus finally got going, there were only three of us onboard the ol’ Bluebird. This meant that we stopped at every single house at the side of the road for incase someone wanted to go somewhere else. At first, we were enjoying the music the bus driver played, we took selfies and video clips of the passing landscapes and we shared a cola – just like in the movies. That was within the first 15 minutes of departure – after about three hours of going at 40km/h we just surrendered our frustration to the gods of Guatemalan time and stared with pale eyes out the windows.

When we finally got to some town (I’m really not good with names), we had to jump out of the bus like vigilantes and run to another bus, escorted by a guard and his big rifle, and jump onto a much smaller bus that was already moving. I still have no idea what the guard was doing there. Maybe to prevent us from jumping into the arms of a proper vigilante. The smaller bus, with its crew of schoolgirls, church girls, hombres going home and a Chow puppy, was a lot more fun and much faster. So after 10 hours of travelling on four different busses, we got to Antigua.

Whoa, nice bells you’ve got there
I think Antiguans are the most photographed citizens on this planet – their city is super photogenic, and if you walk the streets, you’re bound to be in someone’s holiday snaps. The massive charm of the city lies in its churches and plazas, cobblestones and women in traditional dress, strong coffee and sugary-sweet sweets – all surrounded by three massive volcanos with names similar to that of the three muscateers: Agua, Fuego and Acatenango. It rained a bit while we were there, which was quite nice as the air always had that sweet post-rain Jacaranda fragrance.

As you wander the colonial streets, trying to close your gaping mouth, it’s easy to forget that you’re still smack bang in the middle of Central America. For one, Antigua has an enormous amount of language schools, so all the tourists speak this odd Gringo-Spanish. Also, the city’s layout is very similar to what you’ll find in any other European country, and lastly – the shopkeepers have a very OCD way of packing their shelves (see photo below).

But this is just the creamy froth of the city. Take another gulp of what the crumbling walls have to offer, and you’ll taste the bittersweet beauty of everyday life. An old lady, surrounded by her prized possessions of rags and recyclables, whispering to the saint of prosperity and good health. Two pensioners and neighbors displaying the exact same offering of candied fruits and coconuts on sale to passersby, the fruit vendor allowing her photo to be taken with the purchase of an overripe mango and a soft and round mother selling steamy cups of atol and crunchy rellenitos to the devoted outside the church.

And there’s nothing as delicious as a hot cup of atol when it gets cloudy.

Antigua tastes like…
Cinnamon! And luckily for me, every delicious morsel I had in Antigua had the fragrant goodness of cinnamon. Atol is a steamy hot maize beverage made with corn, sugar and cinnamon. It’s like drinking a liquidised tin of sweetcorn – something I’m definitely going to make for all those who come to visit when we’re back home (so beware…). Rellenitos is a little sausage made of fried plantains, stuffed with black beans, toasted on a grill and dusted with cinnamon sugar and our coffee was strong, bitter and delicious. However, the taste that will always remind me of Antigua is that of marshmallows toasted on a smoldering piece of lava rock.

The story of two South Africans who went up a hill and came down a volcano
When it comes to hiking, I’m always as keen as a salsa band on a Friday night. There’s nothing as exciting as packing a bunch of bananas and peanuts into our stinky backpack and hitting a hill with bright eyes and full hearts. Midway during the hike, while we’re huffing and puffing or soaking wet and can’t see a thing, I’ll be that annoying person who’ll say “Why, isn’t this just nice.” Close to the end, I’m usually bored out of my skull and cursing myself for buying hiking boots that are a tad too small (because they were on sale). At the bottom of the hill I’m my ecstatic self again due to that invigorating sense of accomplishment one gets after a hike. That, and knowing that you’re going to order dessert after dinner as well.

The Bearded Wonder however, is a hiker of a different colour. Usually a lighter shade of scarlet with a hint of mud (due to his foolproof ability of always slipping-and-sliding down the path).

When we decided to hike Pacaya, 25km outside Antigua, I was keener than my usual keen. We haven’t hiked for a while, because the Husband had a cough and a chest wheeze that would make a grown man shudder. But this hike seemed simple enough and was only going to take us 3 hours max. It was really easy, a bit steep at times with horse poop everywhere, but nothing my too-small shoes couldn’t take on.
The views were amazing – we saw the three volcano musketeers, the city of Antigua and a hydro-electrical station that provides energy to Honduras. “Politics,” our guide said when I asked him why the much-needed energy doesn’t go the Guatemalans. We shook our heads and walked on.

Pacaya is still a very active volcano – its last eruption was somewhere in the nineties, when a couple of villages were wiped out. So we couldn’t really go up the volcano, but we got pretty close. The areas surrounding the volcano is the greenest green – lush and loaded with shrubs, trees and probably tarantulas. But the volcano itself is as black as its destruction. The lava rock almost feels like coral under your shoes – it’s really light, but strong. And this is where my taste for Guatemala lies. When we got to our destination our guide pulled out a family size bag of mellows, and we used the smoldering rock to toast them till they were puffy. Yes, it’s a very typical tourist thing to do, but I still loved it.

You want to know what’s just as typical touristy? My photos! 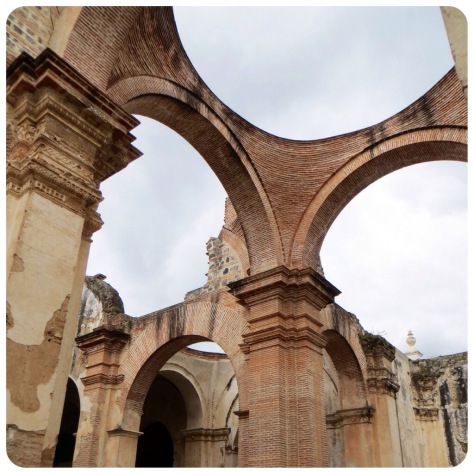 How amazing are these cathedral ruins? After the 1776 earthquake the powers that be decided to give up with all the rebuilding. 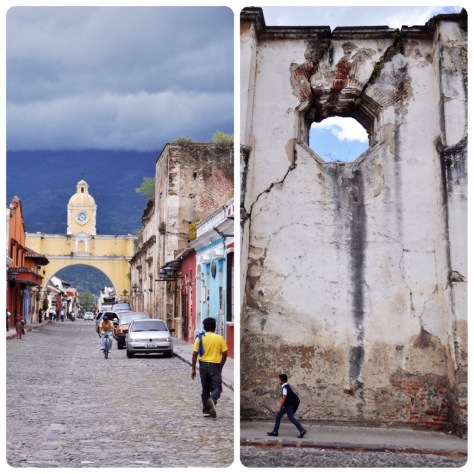 Some Antigua snaps – in the first photo you can see Agua smoldering under its usual blanket of clouds. You can’t actually see it, but it’s there. 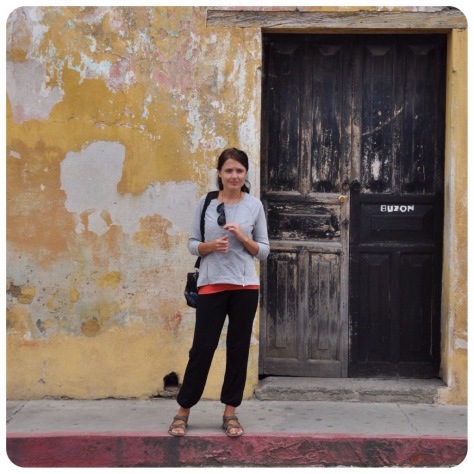 A self-indulgent snap of myself. I really don’t like to pose for photos, as can be seen on my face. 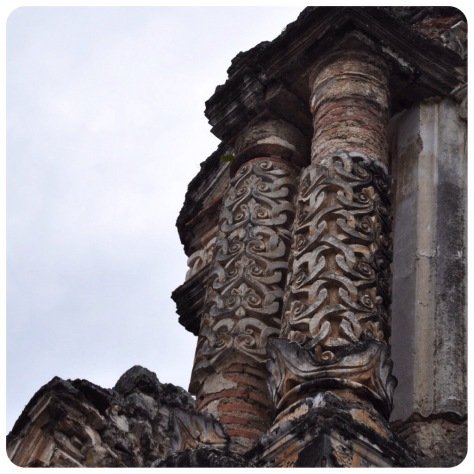 Just beautiful, don’t you think? If you stare long and hard at any of the ruins, some beautiful details just pop out. 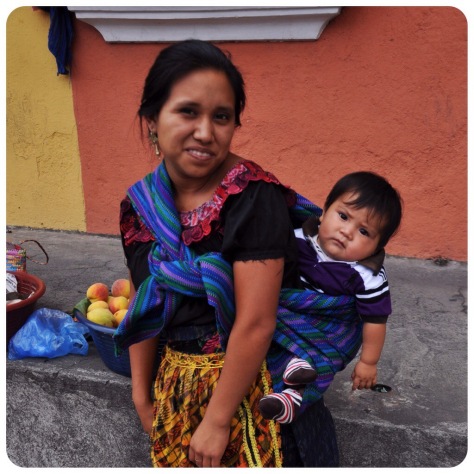 Miss Guatemala and her niño. I had to buy three peaches from her in order to take a photo. 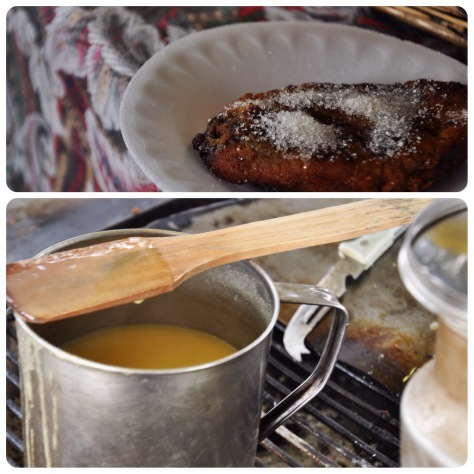 A mid-morning snack of corn atole and rellenitos. 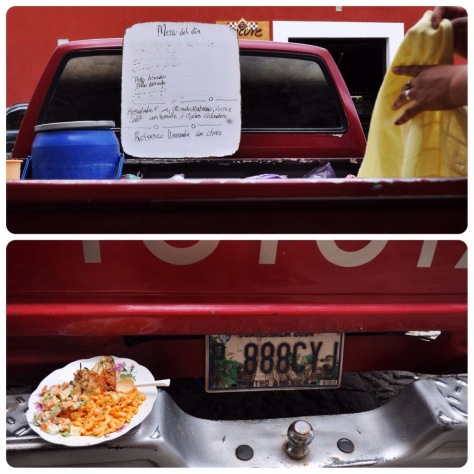 I’ve always been a fan of tailgate picnics. For a dollar we got some chicken, rice and pasta salad. Hello carbs. 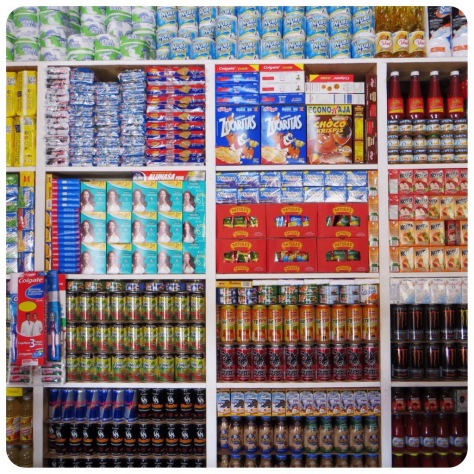 The Little Corner Shop of Perfection. 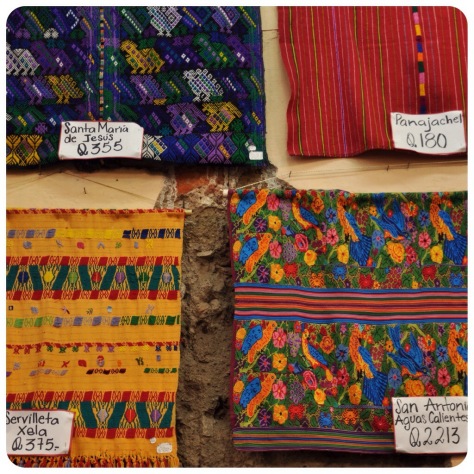 Traditional dress in Guatemala is really beautiful – every area is known by its colour. 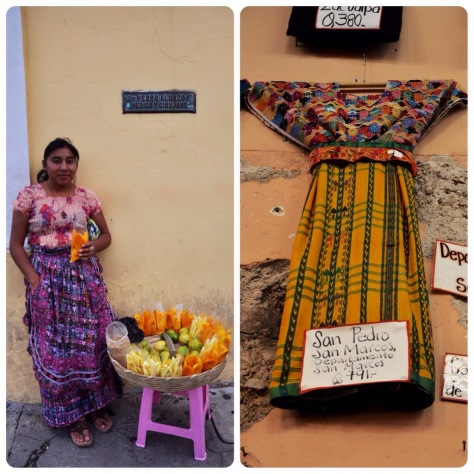 Lady with an Overripe Mango, 2014. (And on the right is another dress. If I had backpack space and some extra money, I would have bought a dress for every day of the week.) 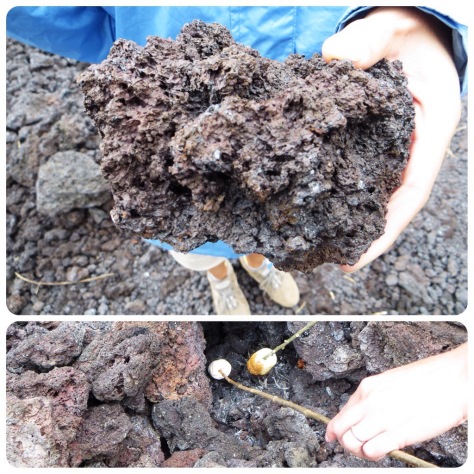 Lava rock and toasted marshmallows are really a match made in sweet heaven. 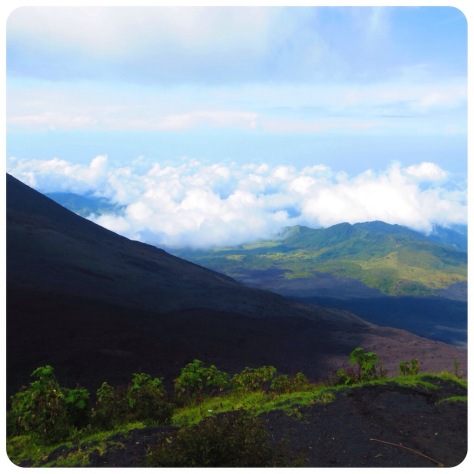 I’ve always been a fan of dark backgrounds and bright pops of colour, but this was just so amazing to see.

A travel blog by the wife.